Do you believe me? when I say “So Eassyy” 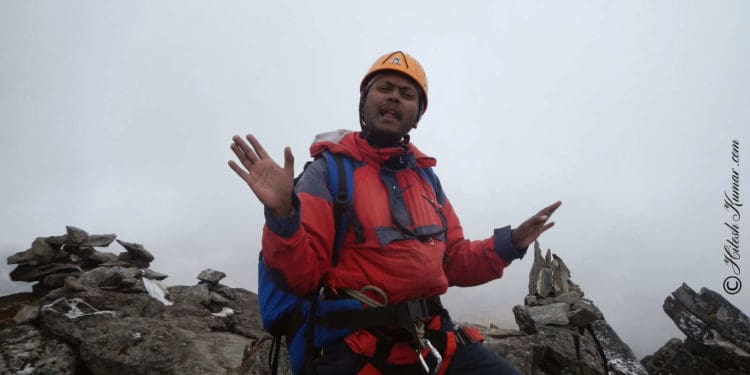 “Yeah sure Sir, very easy” I tell my mountaineering course instructor at Sikkim. All the while secretly muttering prayers under our breath for the strength to take just one more step forward.Just one.

Collectively we basic mountaineering course students refused to acknowledge that this one more step seemed to be going on forever. We had pushed ourselves much further than what we previously thought was physically possible.All the brave machismo talk we brandished, when we mountaineers first met each other had been unceremoniously dumped. We acknowledged silently that we were at our wits end, here on this mountain.A buddy climber, about to throw of his backpack and pray for a chopper to airlift him back to his comfy sofa,TV & popcorn was encouraged by a silent look from his fellow mountaineer.Without saying a word ,communicating “I know ,I know …… let’s go ,I think we are reaching the end”.That mountain silently witnessed some great friendships that day.

We were all that we had to draw strength from.This fine morning we were concluding a 28 day long mountaineering course by climbing up higher and higher up this majestic but ominously named “B L A C K peak” (Sikkim) In my fertile imagination ,this mountain ,wrapped in stillness by near zero visibility fog was like Mount Mordor of  Lord of rings movie (non lord of ring fans ,its OK, I forgive you ,Mordor was where the bad guy lived) .I was of course the hero in my fantasy movie, climbing mordor to save mankind 🙂 I was quickly brought back to reality by my mountaineering instructor shouting at me “Quit daydreaming, weathers getting worse, hurry up”

The only ones calm and composed on that mountain,where the HMI Mountaineering instructors, I am convinced they are from a different planet altogether.Boulders which posed such insurmountable obstacles to our newbie mountaineering eyes where deftly handled by our instructors.Before we knew it, we all suddenly sensed it!It was near…. Oh my God at last ,we are the summit!  That moment was foreign to me ,all the pain,exhaustion and fear faced near life threatening heights ,so far on the climb, just fell away easily .A sense of heightened awareness of that 360 degree panoramic view flooded us.Yes, I would do that treacherous climb again in a heartbeat for that euphoric feeling on the summit.

Even we couldn’t believed as we saw down and realized just how much further we had climbed.In the pic below,do you notice the small curved line,well that’s the river from where we had started earlier that morning. So next time you see an adventurer pretend it was easy or they were not scared ,do not believe them.It’s for the very fact that it’s not easy and pretty scary, that we love doing it. Who knows maybe you will join me on my next mad trip ?  🙂

Oh my god! We made it to the summit! Hurray 🙂

In defense of my movie fantasy ,where I am climbing  Mount Mordor.Just look at  this scene below from Lord of rings movie ,that’s how Mordor looks.Doesn’t it look like a climbing conquest you will tell your grandkids about huh?